Cars are equipped with rescue equipment in the event of an unfavorable situation. Nowadays, accidents happen on our roads almost every day, and we are not always to blame. Unfortunately, passenger safety technologies are constantly evolving, and we are therefore both passively and actively contributing to car accidents.

What is an airbag and how does it works

The airbag is an element of the passive safety system which, in the event of an accident, minimises injuries together with the seat belts.

An airbag is an elastic capsule that inflates with gas – sodium azide, if sensors placed on the car evaluate the situation as dangerous and trigger a controlled explosion. These bags protect the driver and other crew members from a hard impact. The airbag then deflates within a second, so passengers usually register the deflated bag.

Front airbag
It inflates in approximately 0.04 seconds on impact. However, the airbag does not remain inflated, after inflating it is released in such a way that the body is not only bounced off, but very softly absorbed, as if lying down on a pillow. Therefore, an already inflated airbag is usually visible after an accident. The front airbags are only activated in the range from frontal impacts to oblique frontal impacts. 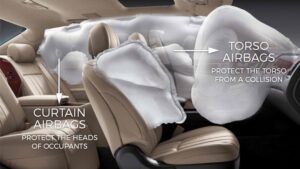 Function of side airbag

Head airbag
The head airbag inflates between the occupants and side windows, from the front to the rear pillar, and protects the occupants’ heads at the front and rear. This airbag is activated especially in side impacts and remains inflated.

Knee airbag
The knee airbag protects the driver’s knees from contact with the lower part of the instrument panel. 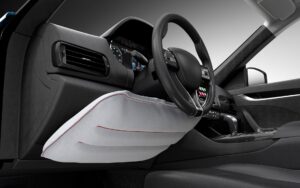 The seat belt is a basic safety feature. Its task is to protect the body from impact with parts of the car or other passengers and also to ensure that it does not fly out of the car. Without its proper use, neither airbags nor body deformation zones will protect us.

The front belts are equipped with pyrotechnic pretensioners and tension limiters, which shorten the belt by about 10 cm when struck by lightning. This removes the slack between the belt and the passenger and pulls the passenger closer to the seat, greatly increasing the efficiency of the belts. To prevent injuries to the occupants from the belts that are too tight, they are equipped with belt force limiters. If the force in the belts exceeds 5 kN (corresponding to more than 500 kg), the shaft on which the belt is wound begins to twist, thus releasing the belt, and the force in it no longer increases. It is advisable for passengers to wear clothing at the points of body contact with the belt. From the point of view of safety, it is necessary that in places where the belt rests on the passenger’s body, there are no hard objects that could be pushed into the body, such as telephone, lighter, pen, keys. The service life of the pyrotechnic charge is not limited, and therefore its functionality is not limited.

Construction and function of the pretensioners

There are many other rescue elements in the event of an accident. Examples are ABS, ASR, ESP, etc.

Anti-lock brake system – ABS
The Anti-lock Braking System prevents the wheels from locking during braking and thus significantly contributes to increasing the car’s handling. In contrast to vehicles without ABS, the best possible handling is maintained during heavy braking on slippery roads, as the wheels do not lock. At the risk of skidding, the ABS 12-16 times per second “removes and adds” braking force, thus ensuring constant wheel rotation and the ability to drive the car at all times. However, you cannot expect the braking distance to shorten due to ABS, and in some circumstances it can also be longer, eg on gravel and snow.

Anti-slip regulation – ASR
Anti-Slip Regulation (Antriebsschlupfregelung) prevents the drive wheels from turning (during acceleration). The ASR automatically engages when the engine is started and performs its own check. The system monitors the speed of the drive wheels using ABS sensors. If the wheels spin, the engine speed automatically adapts to the driving conditions. The system works at any vehicle speed. ASR works in conjunction with ABS. If there is a fault in the ABS, the ASR also switches off.

ESP (Electronic Stability Program) or ESC (Electronic Stability Control) increases control of the vehicle in extreme driving situations, such as when cornering fast or on slippery surfaces. Depending on driving conditions, it reduces the risk of skidding and improves driving stability. System works at any vehicle speed. Bosch was the first to introduce the ESP system in cooperation with Daimler-Benz as early as 1995. In the EU, this system has been mandatory for all new passenger cars and commercial vehicles since 2011. Worldwide, about 82% of new vehicles are equipped with this stabilisation system (in 2017 it was 64%). The ESP system prevents up to 80% of accidents caused by skidding.

Proactive passenger protection
Crew Protect Assistant protects the crew in the event of an accident – it pre-fastens the seat belts on the front seats and closes the electrically operated front windows and possibly the roof window.

Blind spot monitoring
Blind Spot Detect indicates the presence of another vehicle at the “blind spot”. Using two radars in the rear bumper, they monitor the area up to 20 m behind our car. This makes it easier to overtake from lane to lane.

Front Assistant
Thanks to the radar located in the bumper, it guards the area in front of the car and constantly evaluates the distance, direction and speed of objects in front of the car. The system responds depending on the vehicle speed – from danger signaling to its own automatic braking.

Lane Assist
Keeping the car in the lane monitors lane driving and corrects for possible lane changes or even driving in the opposite direction. The correction serves to inform the driver, i.e. the force of the correction is small, the car is still controlled by the driver. In the event of an unexpected event, such as a driver collapse, the system can keep the car in the lane, hit the edge, stop and turn on the hazard warning lights.

Smart Light Assist
The multifunction camera detects cars in the opposite direction and in front of our car with reduced visibility, and dims the high beams so that other road users are not dazzled. The system therefore allows you to not turn off the high beam when other cars meet.

Multi-collision brake
In the event of an accident in which the driver’s or front passenger’s airbag is activated, the car starts to brake automatically (regardless of whether the driver is also trying to brake). In cooperation with other assistance systems for keeping in the lane and minimizing skidding, it prevents the car from turning, maximally brakes and thus minimizes multiple accidents and their consequences.

MBA and HBA
MBA (Mechanical Brake Assist) and HBA (Hydraulic Brake Assist) are brake assistants that maximize the braking effect in a crisis situation, i.e. they increase the braking force in the event of heavy braking and allow you to quickly build up the required pressure in the brake system. Most drivers brake quickly in dangerous situations, but do not depress the brake pedal hard enough. It is not possible to achieve maximum deceleration of the vehicle and the vehicle will travel some extra distance unnecessarily. The brake assist is activated by depressing the brake pedal abruptly. There is then a much higher braking pressure than with normal braking. To achieve the shortest possible braking distance, keep the brake pedal firmly depressed. Brake Assist takes full advantage of ABS. When the brake pedal is released, the brake assist function automatically switches off and the brakes operate normally. Brake Assist is part of the ESP system.

HHC (Hill Hold Control) makes it easier to start on an incline.The simplification is that the system maintains the brake pressure created by depressing the brake pedal for about two seconds after the brake pedal is released. This allows the driver to move his foot from the brake pedal to the accelerator pedal and drive uphill without having to apply the parking brake. The brake pressure decreases gradually with the addition of gas. If the vehicle does not start within two seconds, it will start to reverse. The Hill Start Assist is active from a 5% incline when the driver’s door is closed. It always works only when starting uphill, both when driving forward and when reversing. It is inactive when driving downhill. 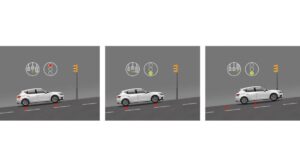 e-Call Emergency call
In the event of an accident when the airbag is activated, the emergency line 112 is automatically called. At the same time, the car sends its position, the direction in which it was traveling and how many passengers are in the car. The emergency call can also be triggered manually, e.g. if you are witnessing a car accident. Professionals on the line will help you deal with such situations. From 2018, all new vehicles must be equipped with it. 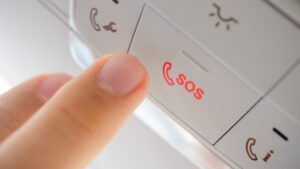 Vehicle stabilisation and assessment of vehicle access options of cutting

Vehicle stabilisation is one of the most important and most often neglected procedures, which we solve before the actual rescue of imprisoned persons. We always use all possible means at our disposal to stabilise the vehicle. We secure the vehicle against movement with the help of basic wedges under the front and rear wheels (arrows on the 3D model and show where we insert) or use a handbrake. ). If the vehicle is upside down and there are trapped people, do not roll the vehicle back on its wheels!

Vehicle stabilisation on the wheels

The best option is four-point stabilisation. The minimum number of places to be loaded is 3. The car is tilted manually and a wedge is inserted under the lifting places.

Vehicle stabilisation on the roof

The weight of the engine ensures the stability of the vehicle and its inclination towards the center of gravity. We start the stabilisation with wedges inserted under the roof. This is followed by the assembly of stabilising bars or adjusting ladders with straps. If it is necessary to remove the body pillars later, we must replace them. Preferably with a spacer cylinder.

Vehicle stabilisation on the side

We always choose the beginning of stabilisation on the side of possible vehicle movement. Usually from the roof. Here we place the wedges under the columns A, B, C. We must always think about the chosen tactical procedure and place the wedges outside the working space. Then we place stabilising bars on the opposite side or, in an emergency, adjusting ladders with drawstrings. The commander continuously checks the design and quality of stabilisation. Upon completion, he must carefully recheck everything.

Be careful when working with glass. When damaged, it is always necessary to protect the airways reaching the rescue. When fitting and cutting all body parts, we must think about the location of safety and structural elements of vehicles such as: belt pretensioners, pyro cartridges for airbags, shock absorbers for door opening, etc.

Removing the B-joint at the car on the side

Removal with „V“ the cut

Removing the B-pillar with a combination of scissors and expander

Not a member yet? Register now

Are you a member? Login now